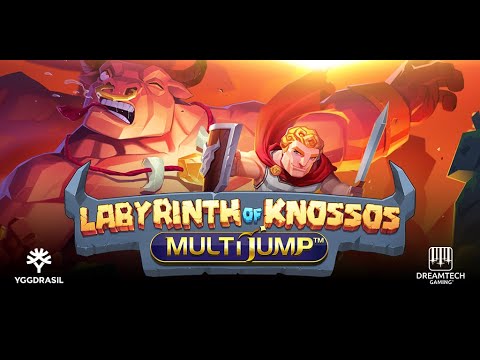 The slot tracker tool is a downloadable extension that gathers data by tracking spins on slot games. Once downloaded, players will have access to two sets of stats: the first is based on their own data, the second is based on that of the community.

But if you decide to start tracking your spins, you’ll have a record of all your data – and you’ll be able to use it to decide which slots you should play, or simply keep tabs on how much you’re spending on gaming. This Labyrinth Of Knossos Multijump slot review, however, will focus on community-generated stats.

One of the most fundamental stats is RTP. This stands for return to player, and refers to the percentage of a player’s total bet that they can expect to win back from a slot game over the long term. The key word there is ‘long term’. Slots manufacturers establish RTP after thousands upon thousands of simulated spins. RTP is not intended to be an estimate of how much a player is expected to win after a single spin or even a few spins.

Labyrinth Of Knossos Multijump RTP currently stands at 136.78%. 509 total spins have been recorded on Labyrinth Of Knossos Multijump online slot. Stats that are based on a small number of total spins can sometimes be unusual. When this happens, the stat is flagged according to our preset ranges. Sometimes, games which have recorded high numbers of spins still have unusual stats displayed. Although these stats are also flagged, they are still accurate reflections of the outcome of those spins.

Every time a supplier releases a game, the supplier provides a fact sheet containing statistics such as official RTP, hit rate, top win, etc. In the past, players had to take these stats for granted and there was no way of knowing whether such statistics were realistic or attainable – until now. With the slot tracker tool, players can group their experiences together to compile their own set of stats, to test out supplier’s claims.

Another great way to select a game is to take a data-driven approach. Download our tool by heading over to slottracker.com. It’s totally free – no in-app purchases, paywalls, or hidden costs. Once you’ve downloaded it, you’ll have immediate and total access to data based on millions upon millions of spins. Search for the games with the highest RTPs, highest wins, best hit rates – you name it. If you want to know which game gives you the best chance to hit a massive win, you can find that out. If you want to find out which game pays out most regularly – ditto!

Visit slottracker.com to start tracking spins now. Some of the insights we provide are unique in the industry.

Some players believe that slots can hit lucky streaks: so-called ‘hot streaks’. As we know, slots are based on what’s known as RNG (Random Number Generator), and therefore such hot streaks are not factual. That being said, we do include information on specific dates when slots pay out big chunks of RTP, or when slot games become particularly popular. You’ll know exactly how a slot has been performing.

Other stats available for Labyrinth Of Knossos Multijump slot game include SRP. Labyrinth Of Knossos Multijump slot game has an SRP of 158.88%. This stat refers to statistical return percentage, and refers to the percentage a player is expected to win back on a per-spin basis. Think of it as the average RTP per spin. It is calculated by taking total RTP over total spins.

Suppliers give volatility ratings to their products. There are two main ratings:

These are very broad definitions and slots are rarely this clearcut. Our tool gives you the volatility rating of slots. Head over to the tool and compare the volatility of Labyrinth Of Knossos Multijump slot game to the official supplier stat.

Are the titles at Labyrinth Of Knossos Multijump casino safe?

Games from leading suppliers are tested and certified by independent, accredited test facilities. These organisations – known as ATFs – verify that casino products meet all the regulations (including player protection, fairness, and security) for the regulated markets in which they operate.

Slots are games of chance and there is usually no way you can impact your chances of winning without wagering more money as in the case of Bonus Buys. Generally, the big payouts are found in the bonus rounds, often known as free spins.

What is Slot Tracker?

It is an online slot tracking tool that tracks spins to generate stats such as RTP percentages and high wins from your gaming activity and that of the community.